Life In The Boys ECNL

The Boys ECNL is entering its 4th season.  With well over 100  clubs nationally and continuing to grow, the platform and competition demand that everyone improves each outing.  The Boys ECNL is the most proven and  highly competitive league in the country and combines regional league with national events and allows players to continue to compete with their high school teams. 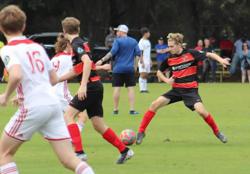 "Teams, players, and coaches are all quality.  You can't relax or you will pay for it'" commented Scott Sievering, Boys Director.  "The level is extremely high. When you make a mistake, you will get punished."

Mirroring the highly successful Girls ECNL, which is in their 13th season, the Boys ECNL has quickly become a top league in the country.  Broken into regional conferences, each club supports teams in the U14, U15, U16, U17, and U19 age groups.  Each member club competes against the other clubs in their conference across all age groups and battle out of conference foes in the ECNL National Events.

The mission of the Boys ECNL is to improve the landscape for players in the United States through innovative, player-centered programming that raises standards of quality and improves the player experience in all aspects of the game.

Added to the conference schedule, teams compete in national events against teams outside their conference.  All games are located at a single facility and all teams in a club compete throughout the day allowing coaches and other teams to watch games.

Path to a National Title

Every league match is worth points.  At the end of the season, qualifying teams compete in the ECNL Playoffs for a shot at the elusive National Championship.